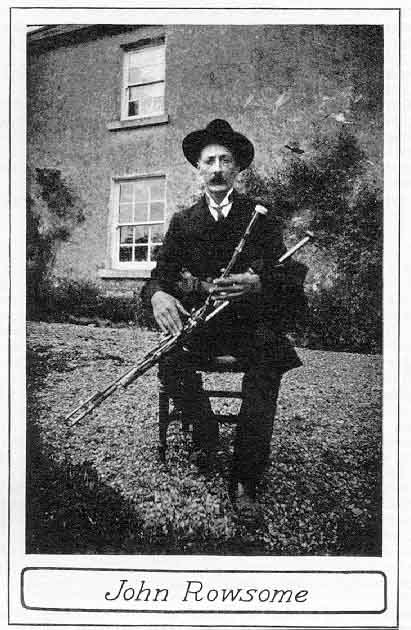 “For power of extracting a strong, voluble tone from the chanter, and imparting a beautiful expression to the music, he has few peers and certainly no superior.” Such is the language of an enthusiastic admirer in describing the accomplishments of John Rowsome, the eldest Son of Samuel Rowsome of Ballintore Ferns, County Wexford, who resides on the old homestead and is consequently unknown to fame. As Mr. Whelan is a very interesting though somewhat partial writer we will let him continue: “There are surely none more conversant with the law of modulation in music. To hear him play a great Irish reel is like listening to the warring elements of nature. The music from his chanter comes with the impetuosity of the wind, which gathers force in its gambols down the mountain side to accelerate its wild career over the plain. And anon it lingers or seems to linger, and goes on again with increased velocity. It comes in undulating waves of sound, and breaks upon the ear as the swells of the ocean break upon the beach and disperse around the feet of the spectator. 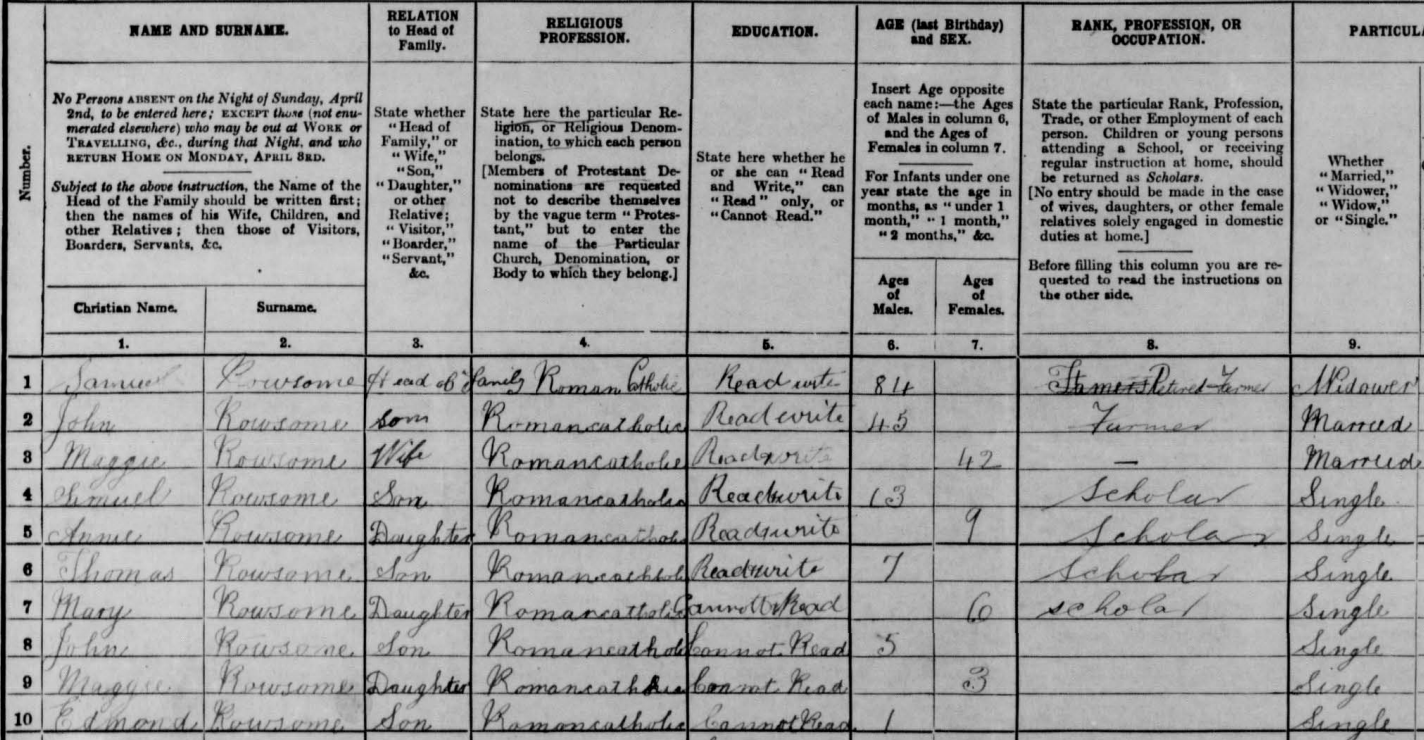 “Who that has listened to the roar of the distant cataract in the stillness of the night would fail to be impressed with a sense that a greater volume of water overleaps the rock, and plunges into the chasm below with correspondingly increasing fury at certain intervals than at others?

“Any or all of the above similes might he taken as illustrations of his music, yet they are but poorly or indifferently put, for still the music swells, breaks, leaps, curvets, sighs, murmurs, ripples, laughs, rolls, thunders, on the ear of the enraptured listener.

“The noise emitted through the chanter and from the strings of many of the swelled heads, is mete musical chatter in comparison to his playing, nor is it to be wondered at, since the musical faculty with him was inborn, and James Cash, that ‘prince of pipers,’ was through all his early years his most intimate associate, friend, and tutor.”

But coming back to earth from Patrick Whelan’s aerial flights, we hasten to inform the reader that John Rowsome, as well as his brothers Thomas and William, studied music under Herr Jacob Blowitz, a German professor, who resided in Ferns from 1878 to 1885, and became efficient performers on various orchestral instruments. John was famous on the cornet, on which he could play jigs as fluently as William could on the violin. Strange to say, heredity overcame their training under Professor Blowitz, and all three owe their present fame to their skill as performers on the Union bagpipes.

Since succeeding his father in the management of the farm, John has not played in public, nor has he continued his practice of music except in a desultory way in private. Just as he would be warming up to his work and when his audience would be anticipating a musical treat, he would strike a few chords on the regulators and put away the instrument heedless of protest or entreaty.

Nearing the half century milestone in age, he is un-ostentatious in the extreme, though active in all that pertains to the revival of interest in Irish music, and the art of giving it traditional expression on Ireland’s national instrument. He has furbished, repaired, renovated, and reeded more foundered sets of bagpipes, for the unskilful, than any other man in the south of Ireland.

Neither is this splendid type of the whole-souled Irishman inclined to “hide his light under a bushel,” like so many excellent pipers whom we could name.

John Rowsome sees no glory in taking his art or his tunes to the grave with him. Like so many small-bore musicians afflicted with atrophied consciences. On the contrary, to his great credit, he is teaching his art, as his generous-hearted father did before him, to all who cared to learn. Among his present pupils are his young neighbours, David and Bernard Bolger, of the manufacturing firm of “David Bolger and Sons,” and their maternal uncle, Joseph Sinnott, draper at Enniscorthy. Who is active and enthusiastic in Gaelic circles.

Wealthy, popular, and patriotic, three members of the Bolger family represented constituencies in the first election assembly which supplanted the Grand Jury system in Wexford, and it is quite within the bounds of probability that in the near future two “gentlemen pipers” of the name will succeed their honored relatives in the same capacity.