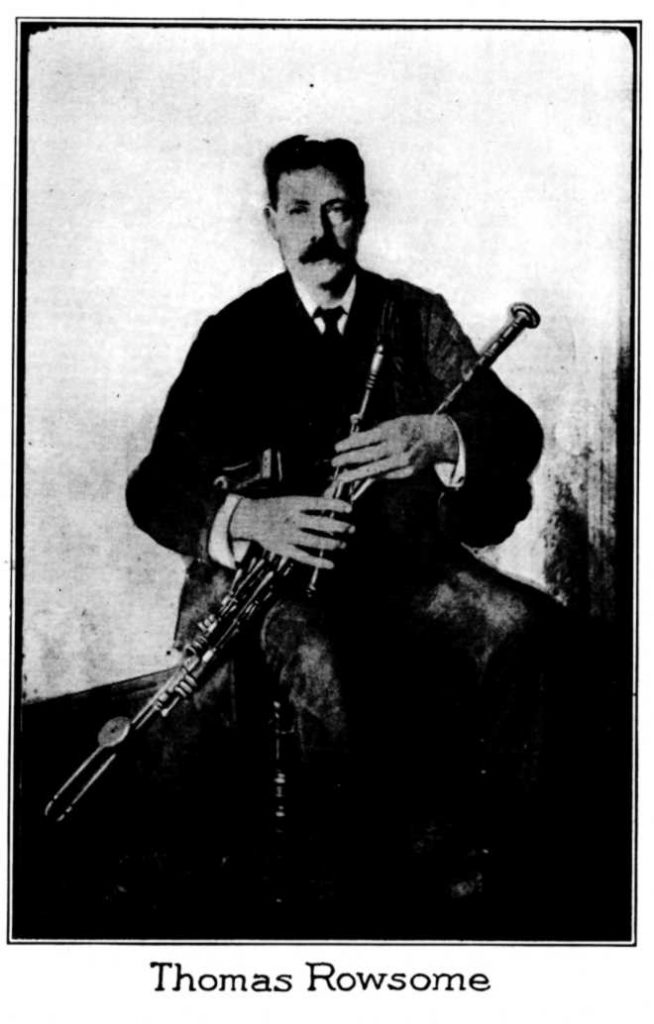 The following text is from the publication “Irish Minstrels and Musicians” by Captain Francis O’Neill. (Published: 1913)

Of this member of the Rowsome family of pipers we can say nothing from personal knowledge, but we are reliably informed that Thomas Rowsome is not inferior to his brother William as a performer on the Union pipes. In fact, some are inclined to believe that, in rendering Irish airs with the manipulation of the regulators, Thomas has the advantage. 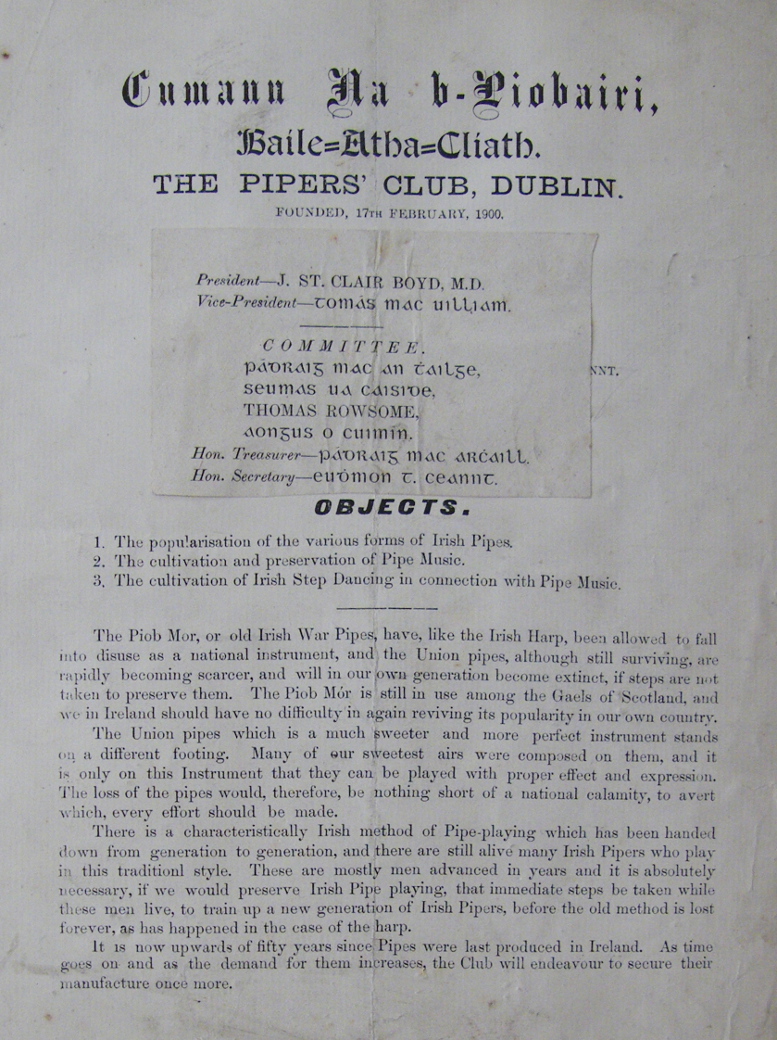 At any rate it speaks well for the latter’s ability that he was awarded first prize at the Dublin Feis Ceoil competition among pipers in 1899. Winning third prize even, in 1897, when “Bob” Thompson of Cork and Turlogh McSweeney. “the Donegal piper,” were awarded first and second prizes respectively, was no small honour indeed. 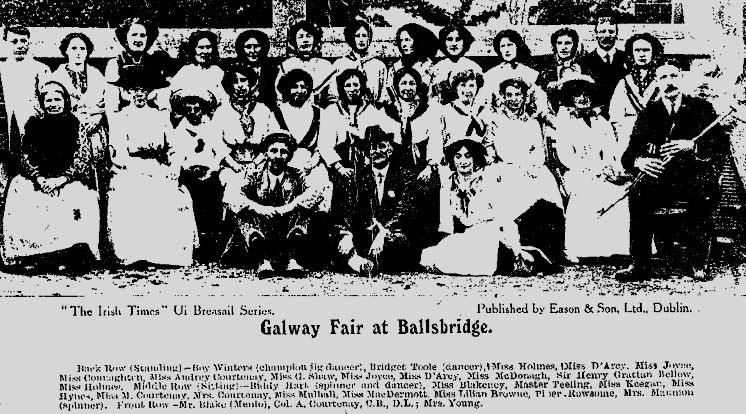 From a discriminating pen we learn that Tom Rowsome is a fine, steady player. And at times even a brilliant one. At single jigs it would be hard to beat him, though in general execution his style may be considered too open and flute-like. However, that is a matter of individual taste. As regards time, he stands pre-eminent; his last bar of a jig or reel, in fact of any tune, is played in precisely the same time as the first, and no dancer can influence him to accelerate his pace or tempo.

Mr. O’Mealy, the well-known piper and pipemaker of Belfast, who played in concert with him on various occasions, speaks very highly of his social qualities. Nothing else could have been expected from his father and mother’s son, anyway. 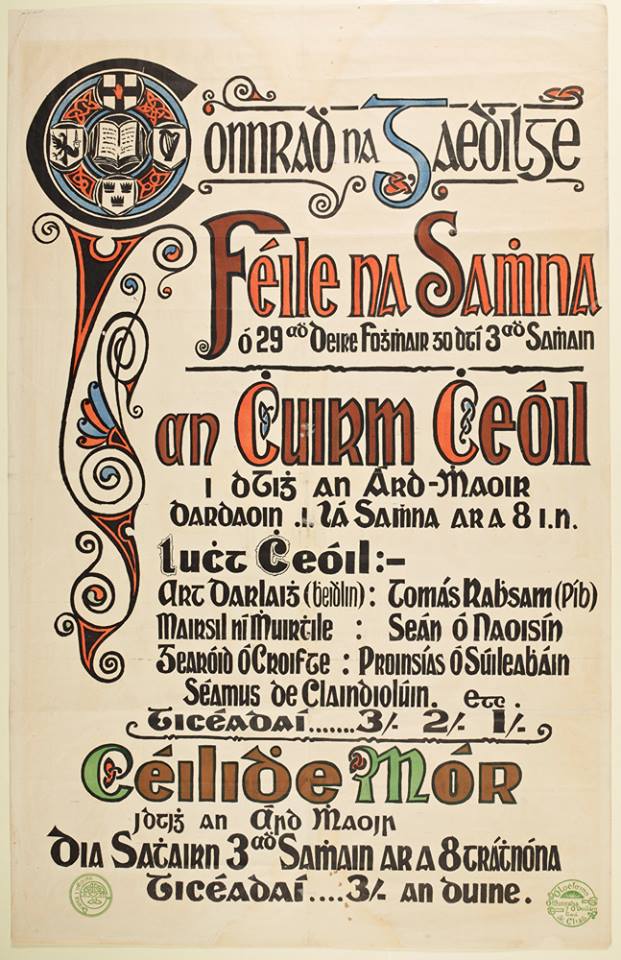 Differing from his brother, John and William, at least in one respect, he stuck to his first love-the Union pipes-and, notwithstanding his musical education acquired under Herr Blowitz of Ferns, his taste for traditional Irish music remained uncorrupted and undiminished. All three became skilful pipers under the instruction of their father, Samuel Rowsome, the famous farmer-piper of Ballintore, Ferns, County Wexford, and all three have won distinction in that line of musical art. 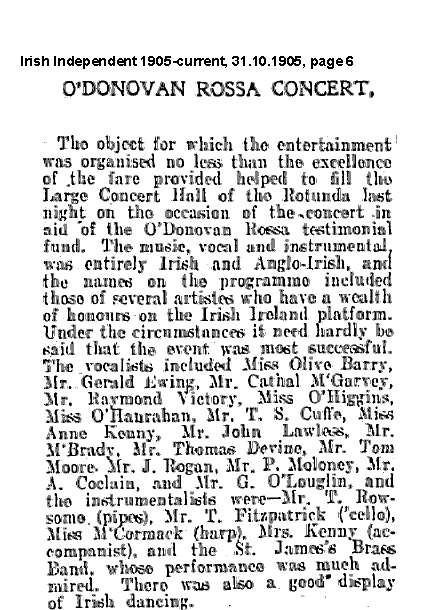 The “Harvest Home” was an established institution at Ballyrankin, Clobernin, Farniley, Morrison’s, St. Aidan’s Palace, and many other residential seats of the wealthy in north Wexford. The attendance of the three brothers was ever in requisition at those annual celebrations, “Willie’s” reputation as a violinist being less than that of his elder brothers as pipers, only in the degree that the fiddle is deemed an instrument inferior to the Union pipes in giving to traditional Irish music its characteristic tonality. The “Harvest Home,” be it understood, was essentially the same as the “Flax Mehil” in other parts of Ireland-all private festivals-the assembly consisting of the family, friends, employees, and invited guests.

During this period Thomas Rowsome became closely associated with the late James Cash in his periodical visits to the Rowsome homestead. Together “Young Cash” and the youthful enthusiast would proceed to a secluded nook in the garden, or, the weather being unfavourable, to a private room in the house, and indulge in long-sustained spells of practice, for everything new in music which the wanderer had picked up on his rambles through Munster and Connacht he would impart to his beloved protégé. More than once old Mr. Rowsome Would come upon them in the act of playing one instrument together, each with one hand fingering the chanter.

‘Tom, you will become a great piper yet,’ Cash would say, as a presentiment of his own impending death would cloud his brow. “The music of your chanter will thrill audiences when the name of James Cash will be but a reminiscence or merely the subject of unsympathetic gossip.” The forecast was prophetic, for he died in his thirty-eighth year, while his friend Thomas Rowsome, now a municipal employee of the city of Dublin, has made a name for himself in the world of music. His engagements are many, not alone in his native land, but on the stage and in the halls of London, Glasgow, and other cities and towns across the Channel, where the mellisonant tones of the “Irish organ” in the hands of a capable performer never fail to arouse the most enthusiastic applause.

About forty-six years of age, over six feet in height, handsome and of impressive appearance, “Tom” Rowsome may not owe all his popularity to his musical gifts. He is also accused of being both genial and kindly, yet apparently insensible to female charms. Whoever the “King of the Pipers,” may be, an ardent admirer insists “he is one of the Princes and Heir Presumptive.” Still there are others. 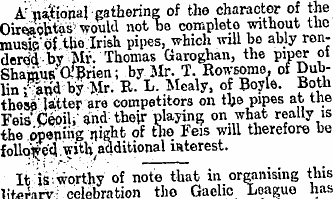