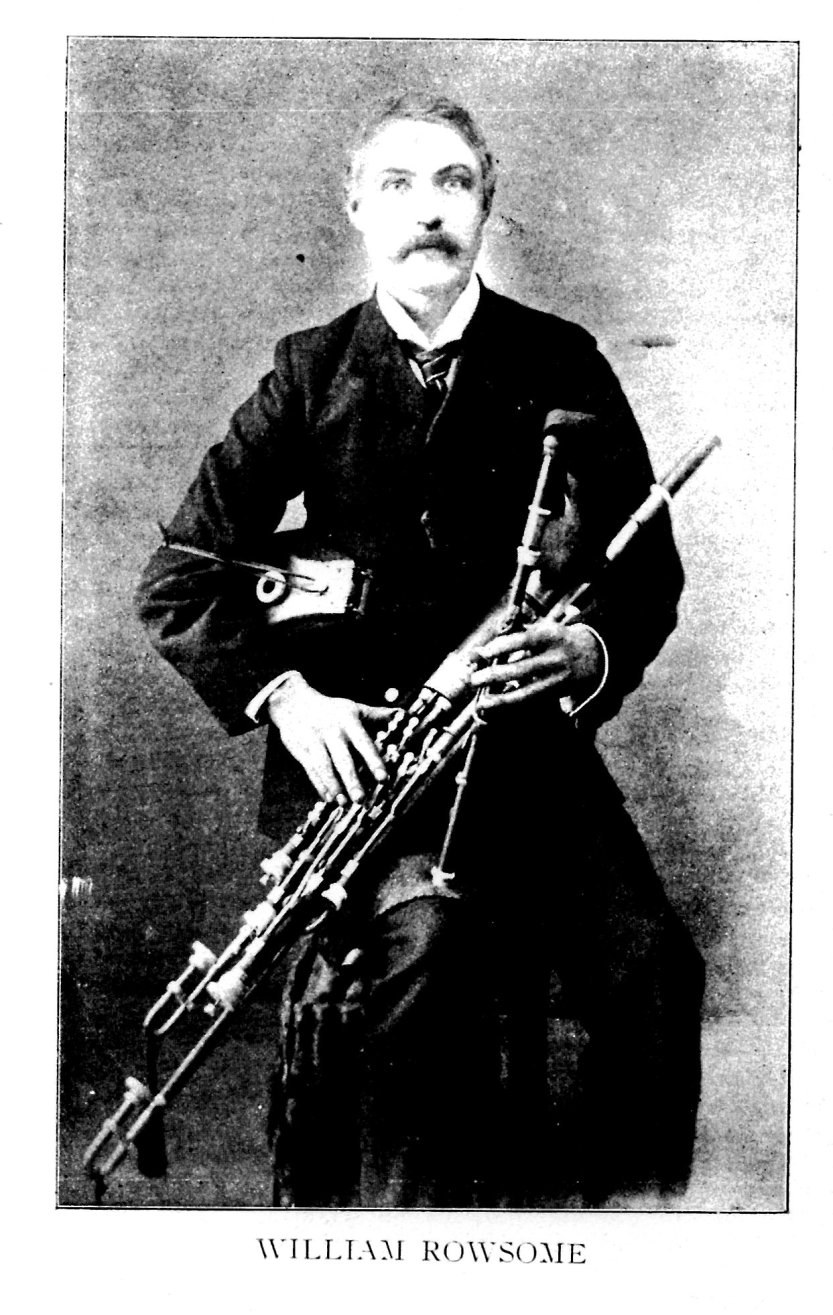 During a brief visit to Dublin in the summer of 1906, the present writer made the acquaintance of the subject of this sketch at his residence, No. 18 Armstrong Street, Harold’s Cross. Being favorably impressed by his manner and music, the visit was repeated in the company of Rev. James K. Fielding, of Chicago, next day. Of course, Mr. Rowsome “put on the pipes” and played his favorite tunes at a lively clip – a trifle too lively for a dancer, we thought. That, however, is a mere matter of opinion. But the spirit of the music was in the performer, unmistakably, for while he touched the keys of the regulators airily and in good rhythm, his eyes sparkled with animation and his whole anatomy seemed to vibrate with a buoyancy which found suitable expression in the clear tones of his chanter. The instrument on which he played and that used by Prof. Denis O’Leary, winner of the first prize at the Munster Feis a few days before, were Mr. Rowsome’s own make. In finish and tone there was no cause for criticism, unless possibly a greater volume of tone might be more desirable in a large hall.
Old-time instruments in all stages of dilapidation were strewn about the shop awaiting repairs, the most remarkable being an immense set made on an original design, and which had lain unused in a Clare cabin for many years.

Always an impulsive enthusiast, my reverend countryman, Father Fielding, was bound to take a shot at it with his ever-ready kodak. Yours truly was persuaded – very reluctantly, though – to hold up the framework of the wonderful pipes to the proper level, it being understood that I was to constitute no part of the target. Standing sideways and leaning backward as far as equilibrium would permit, my outstretched arms presented the derelict instrument in front of the camera. Three months later the morning rnail brought me a souvenir from the reverend photographer in which my distorted likeness was more prominent in the picture than the pipes I had been holding!

Commendably circumspect in his language and reference to others in his profession and trade, during our few hours’ stay, Mr. Rowsome has been almost as fortunate as “Billy” Taylor, of Philadelphia, in winning and retaining the good will of his patrons and associates. The artistic temperament, however, may be accountable for many little misunderstandings which sensitive natures magnify into grievances.
Never was there a greater surprise sprung on “the old folks at home” and the promiscuous array of pipers, fiddlers and fluters at Ballintore and vicinity than the discovery that “Willie” Rowsome had become an accomplished performer on the Union pipes. Having moved to Dublin and married there in early manhood, he was remembered by the people at home in Wexford only as a fine freehand fiddler who could also do a little at the pipes. 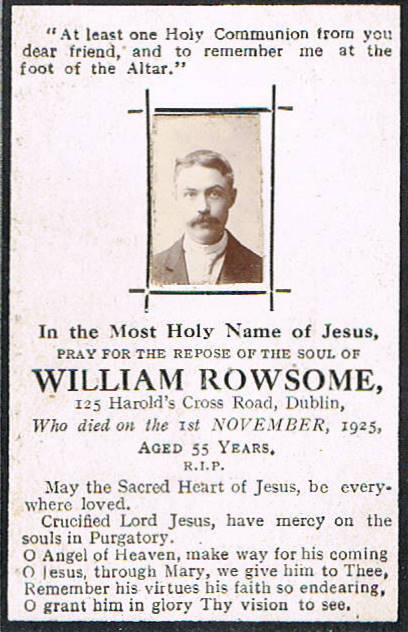 Blood will tell, and so heredity asserted itself nd his case. When he paid a visit to the old homestead in the summer of 1911, his general execution and command of the regulators was a revelation to his family and friends. Replying to a question as to the relative merits of William and Thomas Rowsome, John, the senior brother, said: “That is largely a matter of opinion; sorne would rather `Willie’s’ playing, others would prefer `Tom’s.’ I believe `Willie’ is just as good as `Tom,’ and his style is more staccato.” 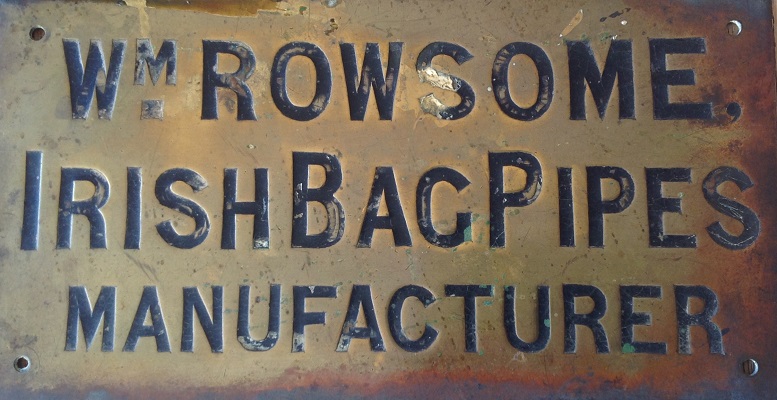 In the language of an admirer who is himself a versatile musician, “his staccato style is a marvel of dexterity, as it entails an expenditure of muscular energy beyond ordinary manual effort. His tipping and tripling are admirable, and his manipulation of the regulators may well, in these degenerate days of piping, be regarded as an innovation in the art. In playing dance music, which he prefers, his chords, save at the end of the strain, are never sustained beyond the duration of a crochet, so that the bars of his accompaniment in reels and hornpipes are regularly filled with four crochets each, and not infrequently varying to the same number of quavers with equivalent rest intervals alternating.” Much

more from the pen of a friendly biographer might be added, but believing it would be injudieions to eater unduly to personalities, especially in the case of a musician still in the land of the living, we must forego the pleasure it would afford us to be more generous with space under different circumstances 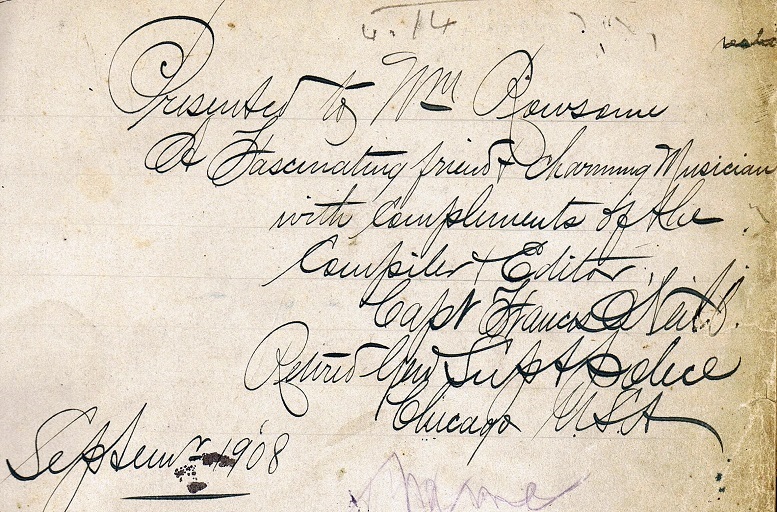